Have you ever been ice-fishing? Let’s just sum it up in two words: It Sucks. Yes, with a capital “S”. I have never been very fond of fishing, but Ice fishing? Where you get to walk out on a huge chunk of ice hoping that it’s not really going to break even though you keep hearing cracks like gunshots and friends telling stories of dynamite retrieving dogs that like to hide under brand new trucks parked on the ice? Did I also mention it’s usually quite cold when you do this? Basically, you go out on a frozen lake. Drill or hack a hole in the ice. Drop a line in and then sit and watch this hole. Yup, pretty darn fun.

For some reason, at about the age of 15, I actually thought this was “fun”. Let’s pretend your 15. You got up at 4:00 in the morning some freezing winter day during Christmas break cause the early fisher gets the fish, or something like that. You’ve been standing on a frozen lake in the middle of the Alberta Prairies, where the wind has likely been blowing about 30 mph all week. The sun FINALLY comes up. You’re bored. You haven’t had a single bite.

Obviously, it’s time to do something else. Not much else around but a couple of ancient run down grain bins on the side of the leg. Guess it’s time to go exploring! My friend and I wandered over to the shore which was part of an old farm yard. The grain bins were in pretty sorry shape. We peaked in one or two to find nothing of interest. One of them, on the other hand, had a great deal of interesting lumps of metal coated in a warm blanket of dust patiently waiting out the winter. Motorcycles! Hundreds of them! Parts hanging from the rafters! Extra motors lined up waiting to be installed in future projects!

We spent a couple of hours in the shed, poking through all of the stuff and dreaming of all the things we could do. All these tires, a Hodaka motor that kicked over, bits of motorcycle frames, we could make a killer go-cart!!! The two thirds of a motorcycle we inspected carefully. It was ROUGH. It had no back wheel. Engine covers were off, engine was stuck, side cover was missing, tire (the front one, cause the back one didn’t exist!) was flat, center stand was bent out of shape, and lots of dings, dents, and rust.

It was OLD. Metal everything. We weren’t too interested, because at the time we were into the REAL dirt bikes- like the CR60, YZ80, and IT400. This old thing was a boat anchor. We thought we could do SOMETHING with it though, and all of the other parts had to be worth something.

Luckily, my friends dad was a realtor and he knew exactly who owned the property. We called him up and asked what his plans were for all of that junk, to which he replied, “Take anything you want!”

Didn’t need to tell us twice!!!

We zipped back out there later that day with my friends dads little pickup. There was a brief encounter with a slightly irate farm hand who was a little perturbed that we were loading a bunch of stuff in the back of the truck. We explained to him what his boss had told us, and I guess that was good enough for him because he left us alone to gather our junk.

At this point, I need to say something about garages. My parents, well, my Dad, has a thing for junk. He collects it by the ton. He’s very good at presentation though, so you don’t really notice it. Unless you happen to be a friend of his or even a friend of mine that has garage space or a farm where old dead tractors, combines, trucks, lawnmowers, etc could be stored. Needles to say, our garage was quite full of STUFF. Cant remember for sure but at the time I think he was working on restoring an old wood burning cook stove and the second Honda Odyssey, both of which turned out really nice and are even still in use (sorta) today. Between his projects, tools, spare parts, and the two cars in that garage, there wasn’t much room for any of my projects.

This wasn’t as big a deal as it could have been. You see, Clint’s Dad had a LARGE shop behind there house, and he never used it. At one point I think we had 7 or 8 sleds, 5 or 6 bikes, a fourwheeler, a boat, and several other assorted bits of machinery in various stages of disrepair. It was a great shop. Had a big sliding door, a loft for storing parts, and most importantly, a HEAT SOURCE!

My parents garage was stuffed full. I was not allowed to have a motorcycle. Hmmm… Two strikes against me. Just meant we had to haul all of the stuff over to Clints house and clear a spot for it in his garage.

It didn’t take long for us to come up with a very fitting name for the bike: POJ. Piece. Of. Junk. Pronounced “Podge”. It was trashed. Bent handlebars. Missing grips. No back tire. Engine seized. Airbox missing. Carb cover missing. Oil cable missing. Clutch lever missing. The bike was 30 years old, weighed a TON, the list could go on and on. I do believe its only saving grace was that it was MINE! Well, half mine anyways… I still wasn’t allowed to have a motorcycle, but it seems my parents were okay with me having HALF of a bike (maybe more like a ¼ of a bike, since there was only half a bike there!) as long as it didn’t come home.
Posted by dorkpunch at 1:11 PM 2 comments: 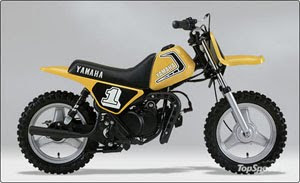 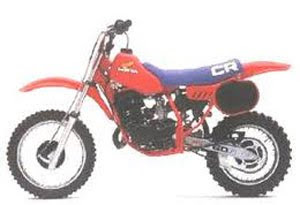 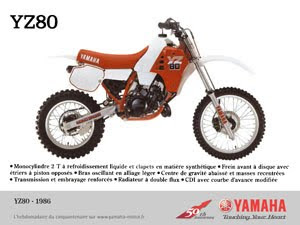 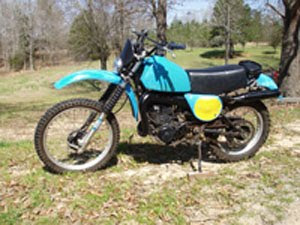 
Posted by dorkpunch at 9:47 PM No comments: