Running out of time to get the roof done before the ins. cancels my policy, so here goes... Few before pics.

And here's whats going back on it.

Spent the day ripping the old roof off.

But mad sure to stay hydrated...

Even had a little help.

Didn't even need to use a ladder. NEW that door would come in handy! Wife looked at me a little weird though as I walked through the house wearing the backpack blower. Maybe I should have had it running?

Got 'er all ripped off except for the edges under the piles of shingles. Waiting for the dumptruck to show up at this point.

The dumptruck. Well, this was exciting. Borrowed it from the teacher across the hall- let me use it free of charge for helping him bleed the brakes. Brakes are still marginal at best, and as I was pulling out of his yard he told me to go slow over any bumps or the front end will start to death wobble. Great. 11 miles to go...

Made it home fine though. Great old rig!

Got the roof all swept off, parked the truck under an eave, and thats it until Monday. 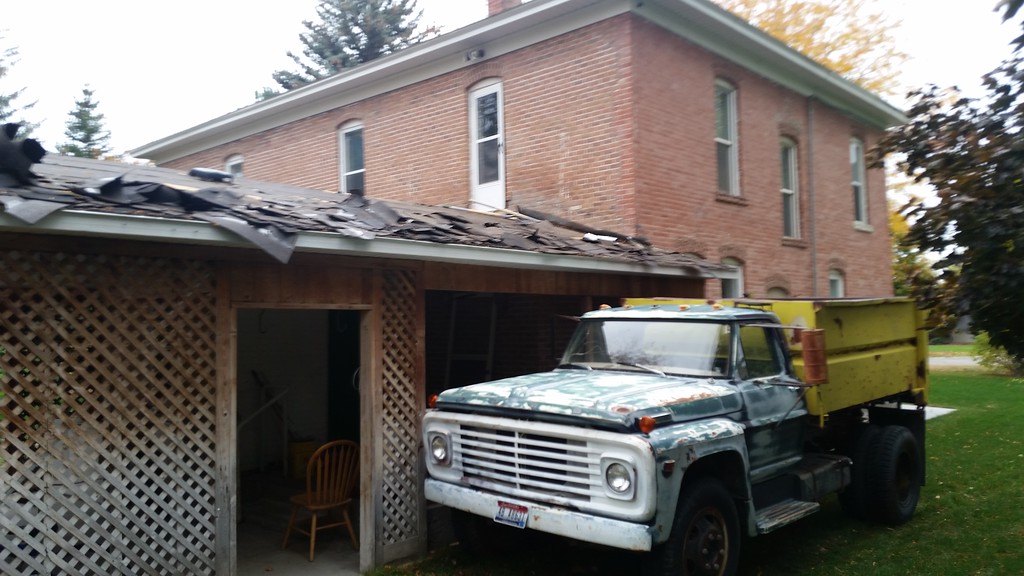 We picked a great day for doing this, no wind and lower temps made it nice work. We are replacing the old metal / shingle roof with all metal, black so it kinda matches the rest of the house which is shingled. Don't have the time or the money at the moment to do the carport with shingles to match the house, but it's in the back so we'll be the only ones who ever see it and it won't bother me that much.

Have the rest of the week to finish pushing the shingles in and strip whats under the piles.  Sounds like I have some help showing up Saturday to lift the metal sheets up on the roof and tack them in place.
Posted by dorkpunch at 4:01 PM No comments:

Want to help out!? LEGO ROBOTS!

I needed a simple basic robot for my students to learn to program with, so here's the design I came up with.

I changed my simple sensor bar on the last one and have since converted them all over. The new version holds an ultrasonic sensor, light / color sensor, and a third motor that can act as an arm for lifting things.

Once I got it figured out, it took about 5 minutes to build each bot. Should be pretty easy to maintain. Still need to buy 5 more kits and build 7 more robots! Anyone want to put some money towards a good cause?

Here's the old ones we are replacing.

And donate to a great cause!  I've had some great donations already but still need $600 more.  You can try the promo code "spark" and it may double your donation, but I think its expired...

Thanks in advance for your help!
Posted by dorkpunch at 3:53 PM No comments:

Time for another VOTE!!!

If you go back aways, you'll see the wobbler air engine I have my 8th grade students build in Metals 2.  Well, I've been working on another version of it.  Pretty simple really- just welded another valve plate on the opposite side, added another cylinder and piston, and cut the pistons so they can share the same crank pin.

Works okay, but still needs some tweaking.  Will run fairly slow but if I try and crank up the speed, it seems to be fighting itself and won't rev way out like the single cylinder version does.

Fun to play with, anyways!


Posted by dorkpunch at 9:44 PM No comments:

Missed the blood moon, but not the full moon!

Not great quality, so forgive me. Picked up this telescope at a local goodwill store for cheap.

Finally had a chance to try it out the other day (the day AFTER the blood moon... we were socked in with clouds).

I though these turned out pretty nice for just holding my phone up to the lens and trying to snap some pics!

Moon is only the bottom right corner of the pic, the other arc is the edge of the eyepiece.

Don't know anything about the moon but that big 'ole bug splat mark is pretty neat.

Closest I could get. Check out the craters! 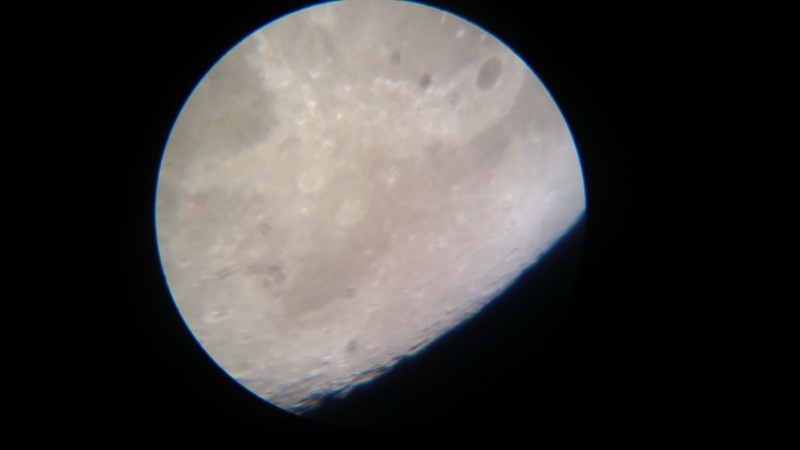 It was really hard to get that pic- you could actually see the moon moving across the field of view!
Posted by dorkpunch at 8:01 PM No comments:

This Old House #7: Up to the HIGHEST heights!


Although no flying kites...

We had a slightly chilly night the other day- it got all the way down to mid '40's and had been "cold" all day, so I lit the stove. Burned some paper to see if it actually drew as it has a really short chimney, then threw a couple of small logs in there. Don't need to worry about draw- sounds like a vacuum cleaner its sucking so much air. Puts out a fair amount of heat. Will probably keep this corner of the upstairs nice and toasty but I don't think it'll warm the rest of it.

In other news, we got a "notice of cancellation" letter from our insurance policy. Was expected, but I was kind of hoping to be able to put off re-roofing the carport until next spring. Now I have 30 days.

I had a fellow come "inspect" and clean the chimney for me. Learned some new things and think I can handle the cleaning duties now. Well, as soon as I get a couple of ladders, anyways...

Heck of a view from up there.

The "main" chimney is pretty solid. Not very straight, but solid.

You can tell where its been extended some time in the past. One of my questions was weather or not we could convert one of the holes back to wood burning so we can put a woodstove in the dining room where the little gas stove is. Answer- most likely. I didn't want to peel this cover up and then have to worry about re-sealing it later, so we left it at that. There are definitely two separate holes at the base of the chimney, and there looks to be enough room for a split at the top. Interestingly, the LITTLE pipe is for the furnace, and the big pipe is for the little gas stove.

The other chimney is in pretty rough shape. Really just a loose stack of bricks... 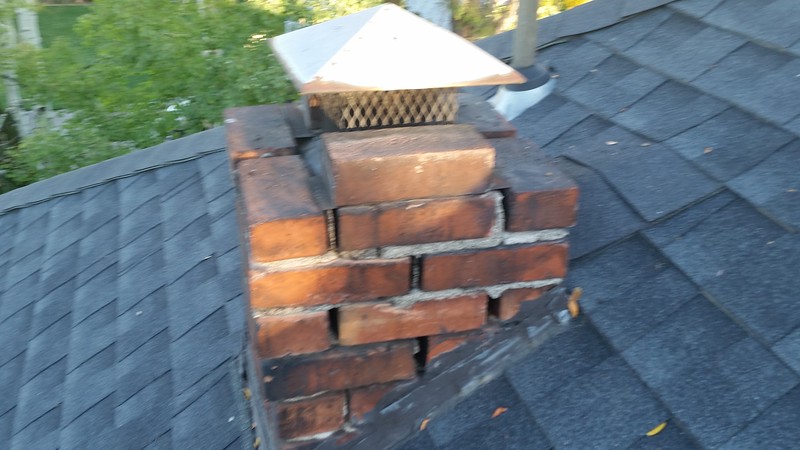 Apparently didn't look too bad though, no build up of any kind and it draws great. Well, as long as there's no wind.

Another view from the back-

and the carport roof that needs to be redone.

It's a long ways up there!

Meeting a brick mason tomorrow to see what he would charge to raise the chimney 4 feet or so to get it over the peak of the roof. Might try doing it myself, never done any masonry before but I've got a neighbor that I think could point me in the right direction. So many things to do, so little time...

Also need to get with the rain gutter guy and see what he thinks about the spot above the light in the last picture. When it rains water drips off that edge and hits the roof of the carport. When it does, it splashes up quite a ways on the side of the house. There has been some water damage in this area in the past and I'm thinking the water is soaking into the bricks and getting behind the flashing on the carport roof.
Posted by dorkpunch at 8:47 PM No comments: