Love this.  Wife and I were talking about something the other day that made me remember this post I had started a long time ago.  We like to think we've done okay for ourselves.  Our conversation basically boiled down to the wondering why we were relatively "stable" in our lives.  What we decided is that because we know how to "make", create, build, DO- we've been able to save ourselves a LOT of money.  I was looking at a diagram the other day that showed what basic repairs on an average vehicle would cost.  This isn't the same diagram but you get the idea: 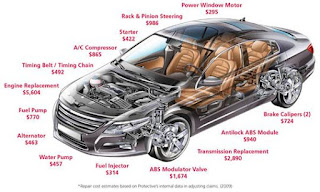 FOUR HUNDRED AND SIXTY THREE DOLLARS!?!?!  For an ALTERNATOR?!  Holy cow.  The alternator all by itself is usually less than a hundred bucks, and unless you're working on a foreign car they aren't that hard to change.   I just replaced the starter in Mrs. Punches car.  Took maybe an hour, and the starter itself cost something like $65.  Not to mention we purchased the car for under $1,000 in need of some work, with low miles, fixed it, and have put almost 70k miles on it in the last 5 years.

Moral of the story- everyone, man-woman-or child- should now how to weld and sew, and everything in between.
Posted by dorkpunch at 8:04 PM