I set a goal at the beginning of the year to put 6,000 miles on my bike before I, uh, "put it away" for the winter (which really doesn't happen, I just get to ride it less frequently).  That would put my odometer at 60,000 miles.  Not sure I'll get it, but I'm sure going to try!

My kids were staying with Grandma and Grandpa for a couple of weeks, and my wife had a youth camp to go to.  Wait, I have a week to MYSELF!!?

Left Blackfoot, Id about 10:00 in the morning. Was pretty overcast with a chance of rain, but hey, this is happening rain or not.

Can you tell my wife was being a goofball with the camera? 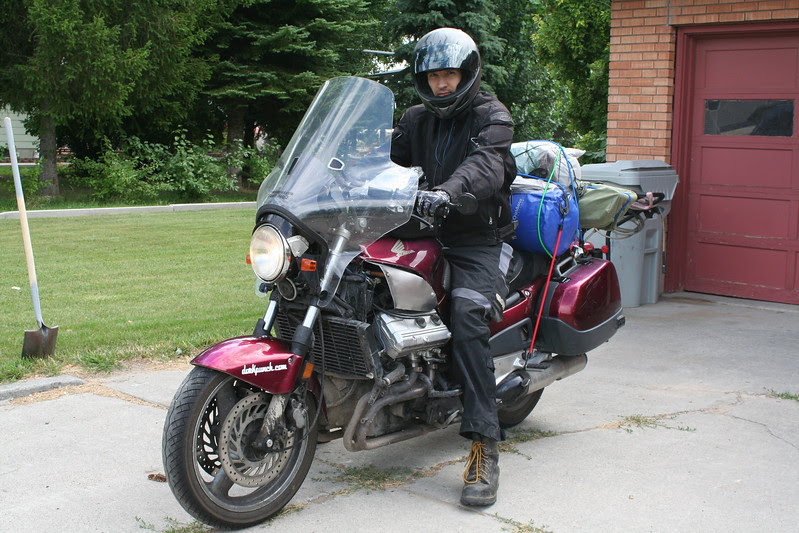 The first 35 miles were in road construction. 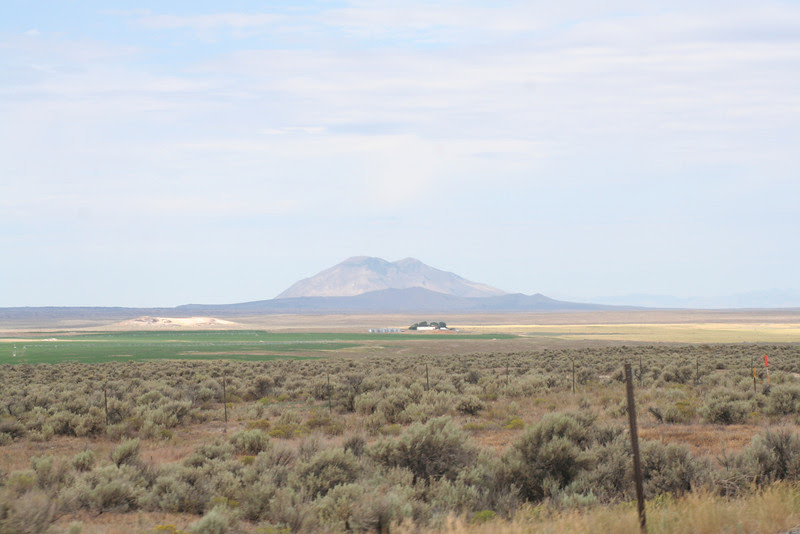 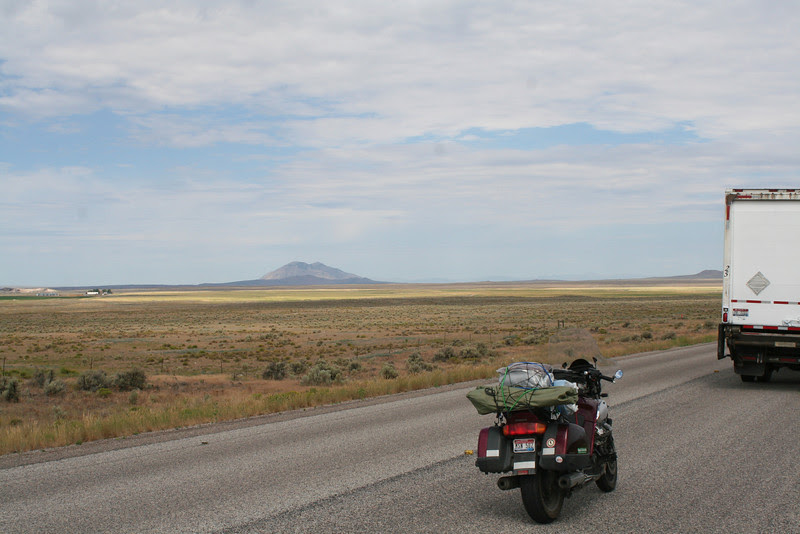 Stopped in Arco for a quick shot of the chunk of Submarine. 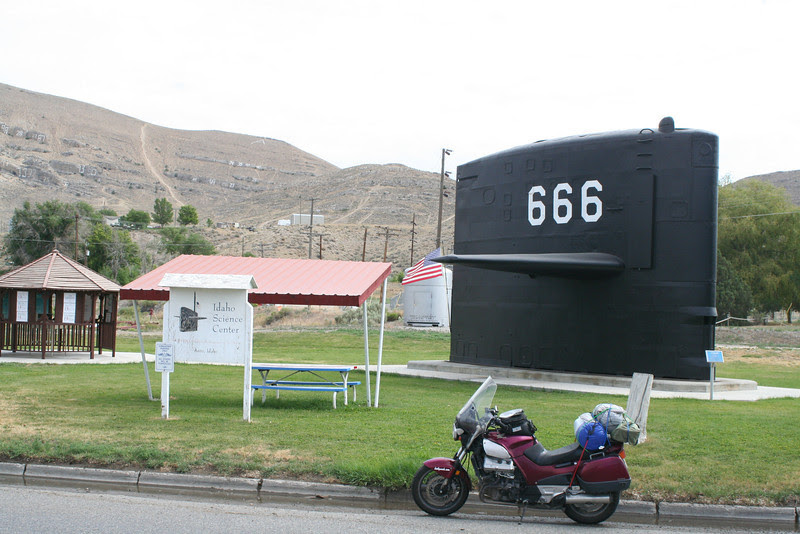 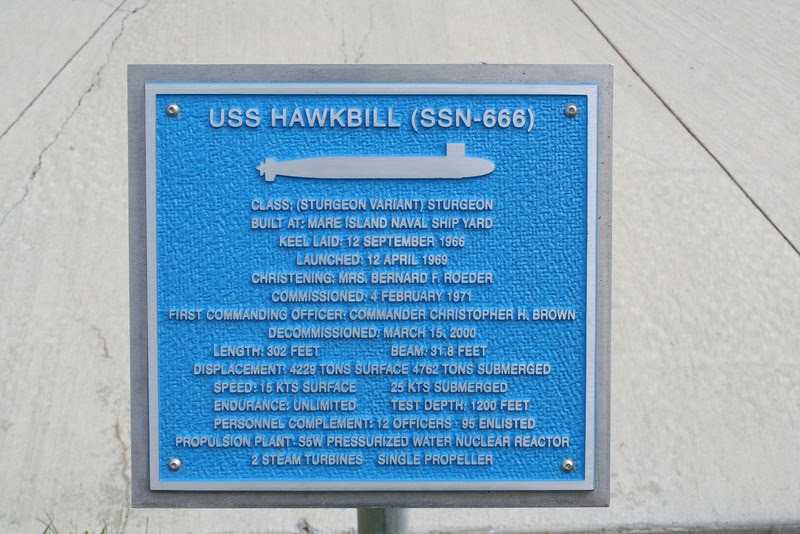 And while I was there I bought an EIGHT DOLLAR CAN of WD40!?!! My speedo started to squeak the first 10 miles of the trip. I pulled in to a car parts store (er... THE car parts store), pulled off the cable and lubed it up in hopes that it would cure the noise.

Well, got a LONG ways to go still so I guess I can live with a bit of noise from the dash.

A few more miles brought me to Craters of the Moon park. Pretty cool lookin place, really need to go into the park someday and check it out. I'm now roughly 75 miles from home. Pointless self portrait because I was getting bored with the desert... 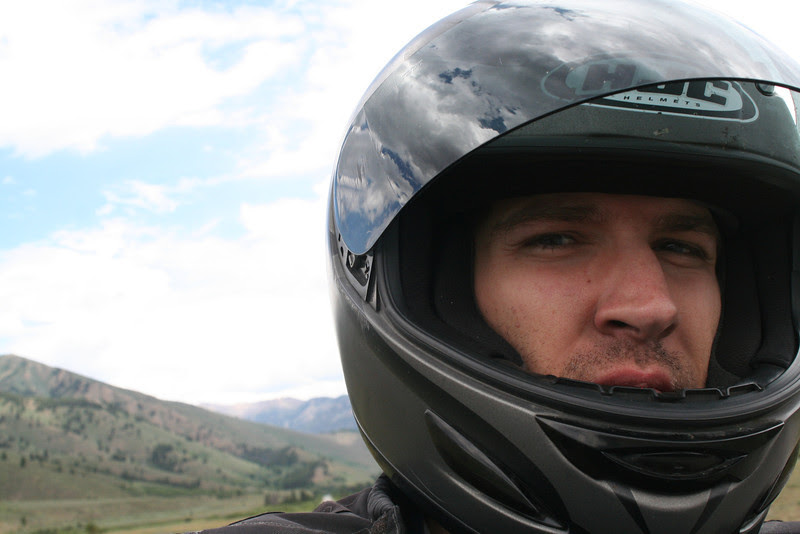 So a quick story. I had been plonking on down the road for a while and was slowly catching up to what I thought was a cop. Sure enough, it was. I ended up following him for 20 miles or so, and then we both turned off on another road. The speed limit was slightly lower, and he was stuck behind a slow moving car. It was going either right at or 5 miles an hour below the speed limit. I followed 'em for another 15 miles or so, and finally on a long clear stretch with a passing zone, while he was tailgating the car and they were both going about 50, I passed.

Sure enough, he pulled me over...

Gave me a warning, and then proceeded to talk bikes / routes for another 5 minutes on the side of the road.

Finally starting to get into the hills! 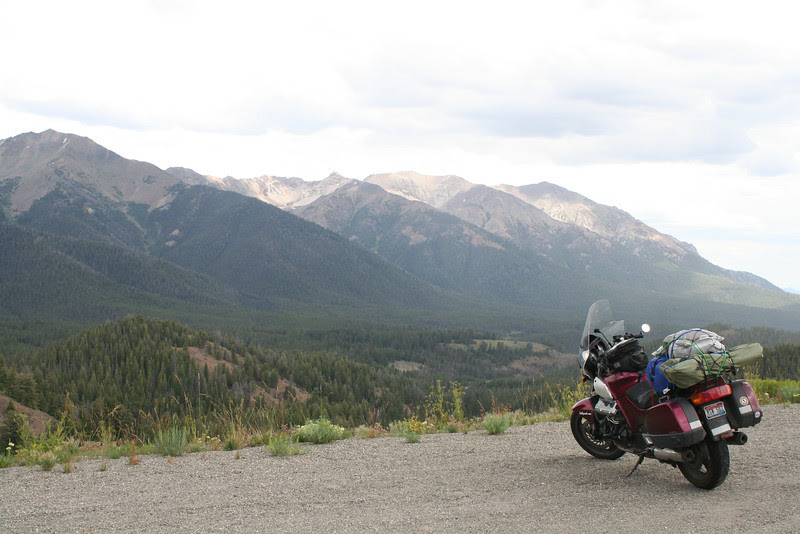 If you look real close you can see the shorts-and-t-shirt guy on the 950 blasting down the road. 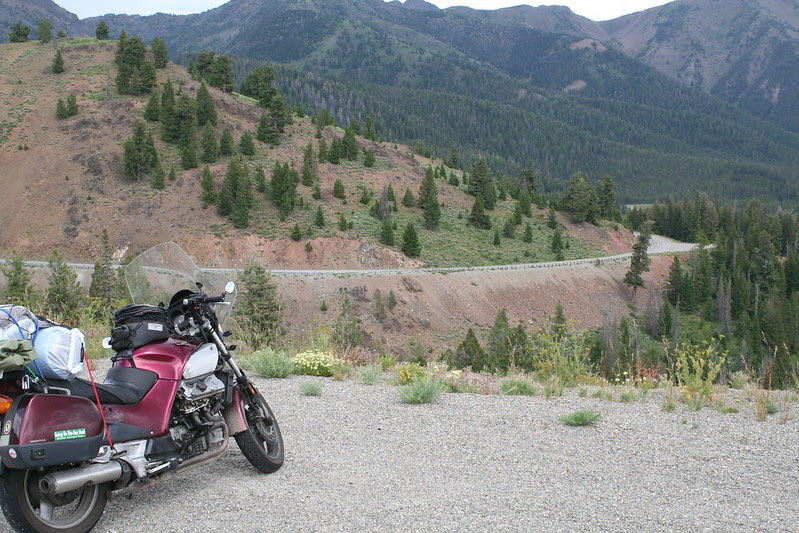 These pics were taken near the top of Galena Summit, North of Ketchum, ID on Hwy 75.

Kept on towards Stanley, Id. GREAT roads to ride a bike on! It was forecast to rain off and on this day, and it did. Just not on me. 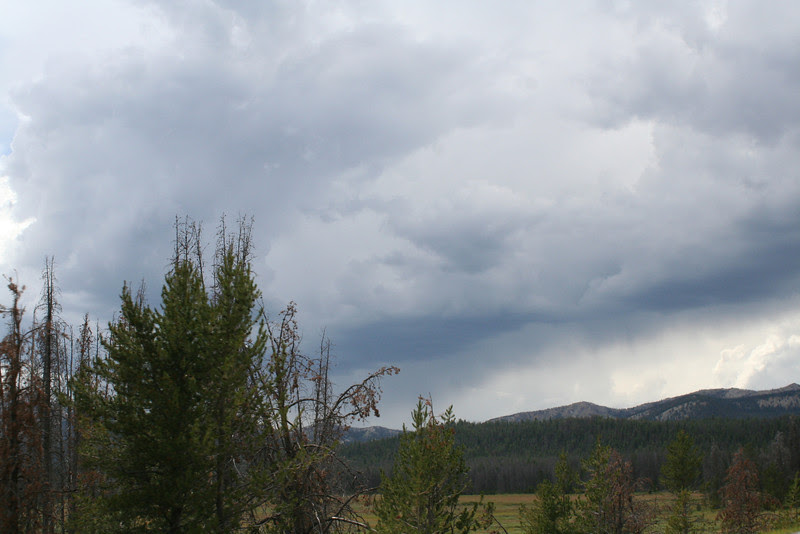 Most of the roads the entire trip run through valleys and follow creeks and rivers- a good sign of fun roads. 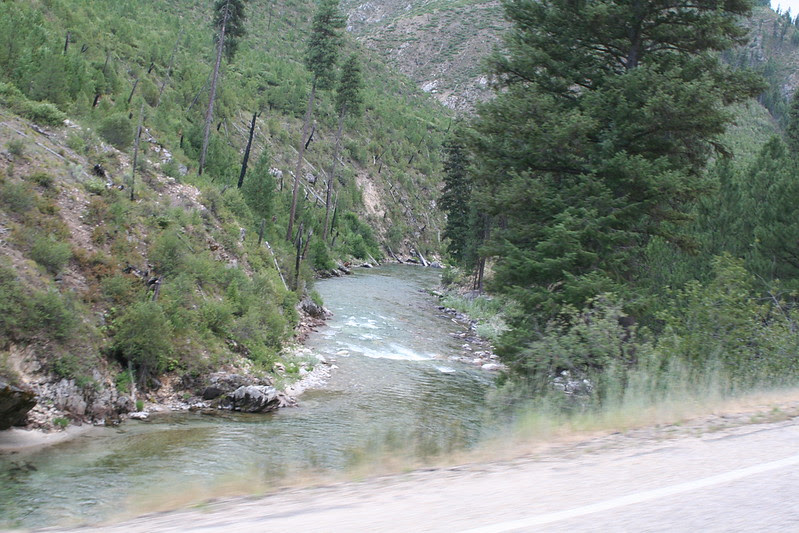 Okay, so maybe I *did* get rained on a little bit. At Stanley, I turned off on Hwy 21 to Lowman, then did the Lowman-Banks road over to Hwy 55. One of my favorite stretches of the entire trip, but it was kinda short. These pics were taken there. 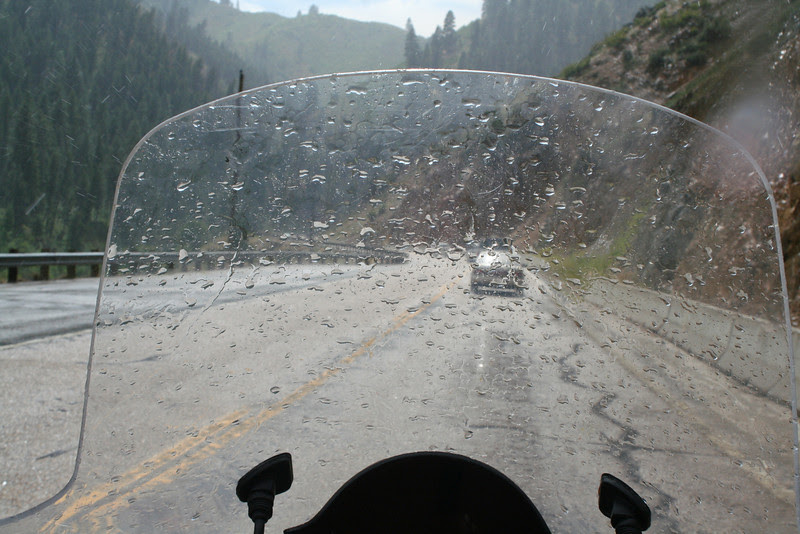 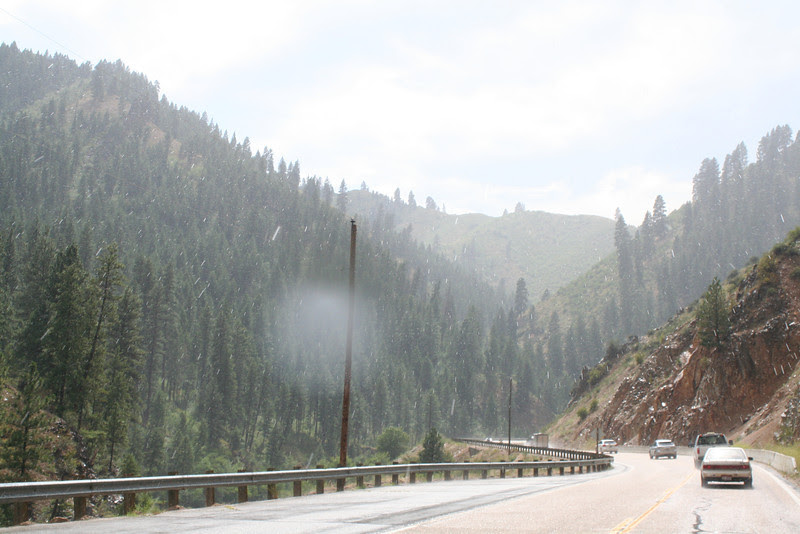 The GRAND TOTAL of "rain" that actually got me sorta wet for the entire trip was probably under 10 minutes- 30 seconds here, another minute there. Wasn't ever in a big downpour either so I basically stayed totally dry- didn't even have to break out my rain gear!

Rivers were running strong! This was alongside Hwy 55 headed towards Cascade, ID. 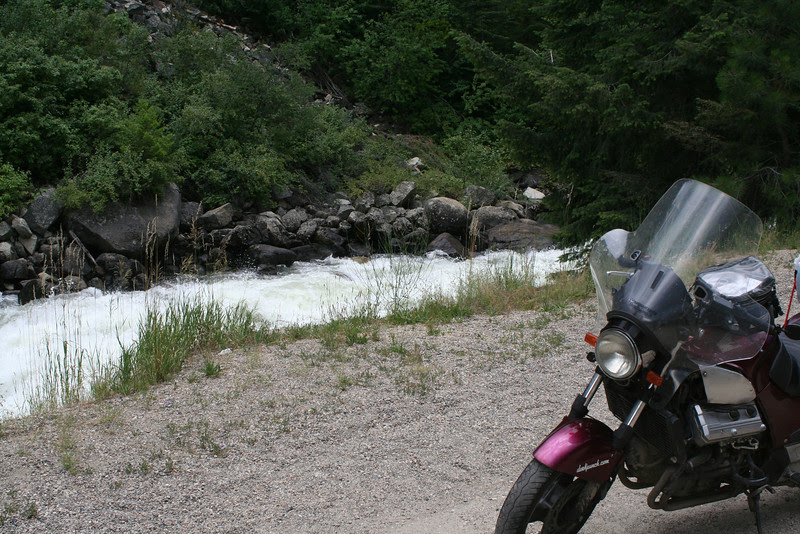 Thats were I'm headed, right where the rain is coming down. 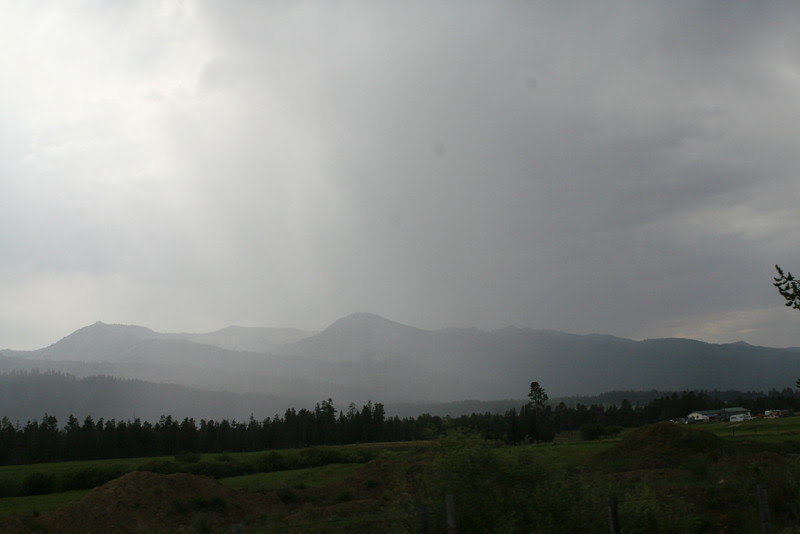 Made it to Cascade, and swung into the park to see if I could remember where Grandpa would take us camping / fishing when I was a kid. Think I found it, but kept going thinking the road would go back out to the highway.

Nope. Took me across the dam: 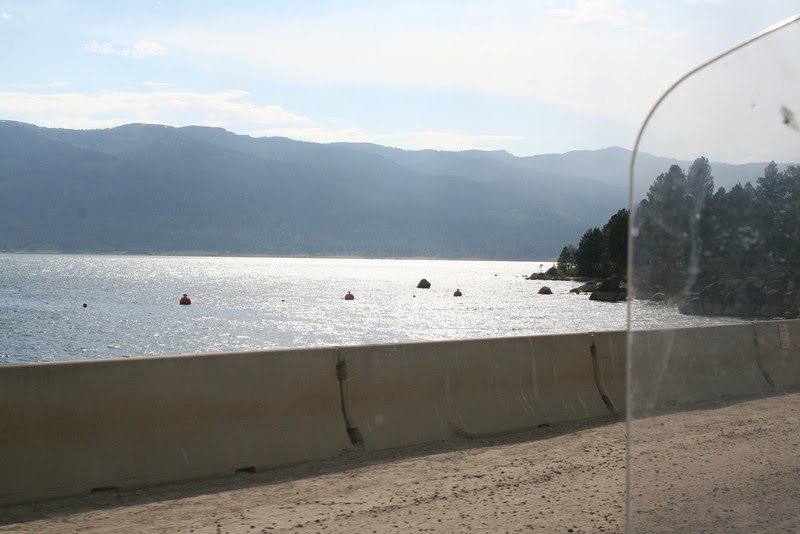 and through 20 miles of gravel road, 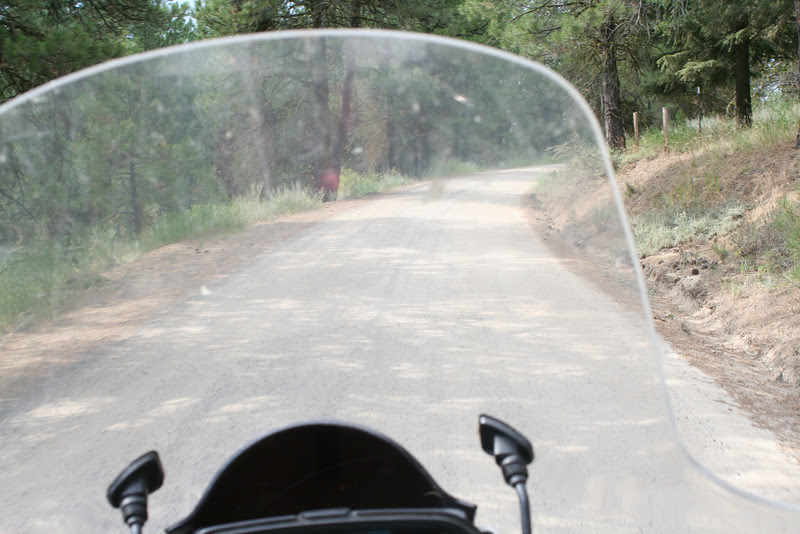 where I almost managed to change the "Hog Catcher" into the "Deer Slayer". 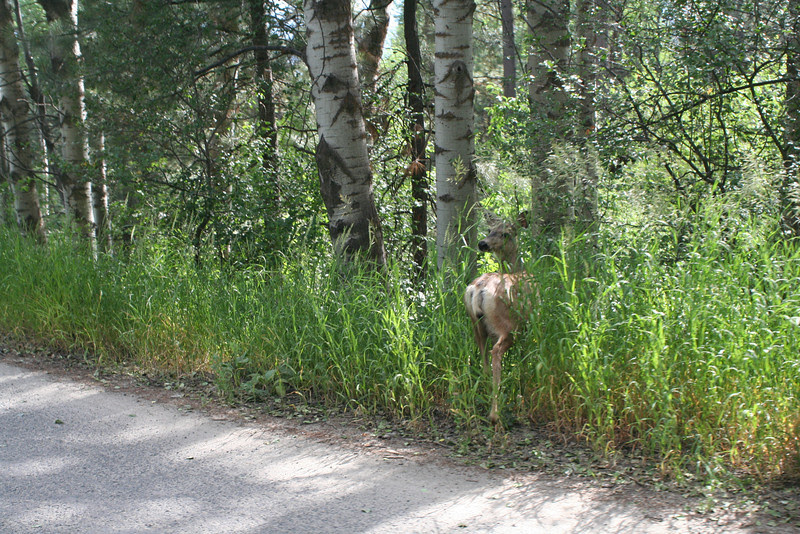 Finally made it back to the highway. Lake Cascade: 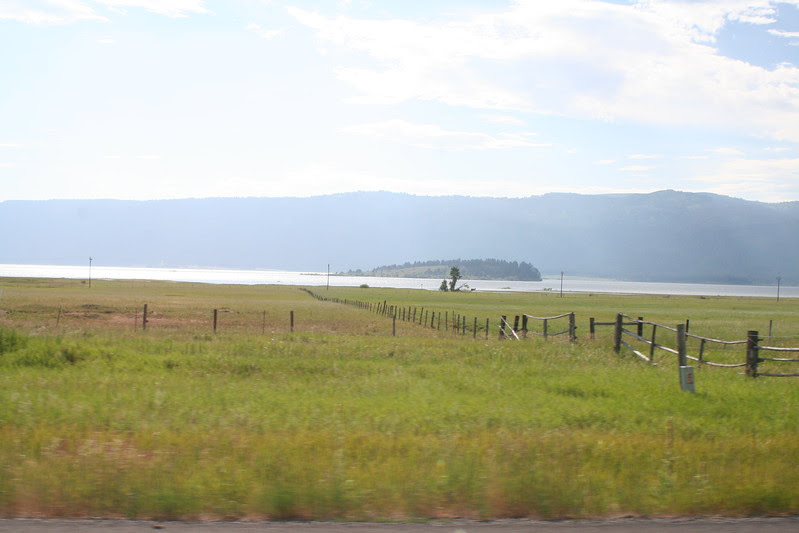 Campground! Stayed outside of Donnelly, Id, at the Rainbow Pt. campground. 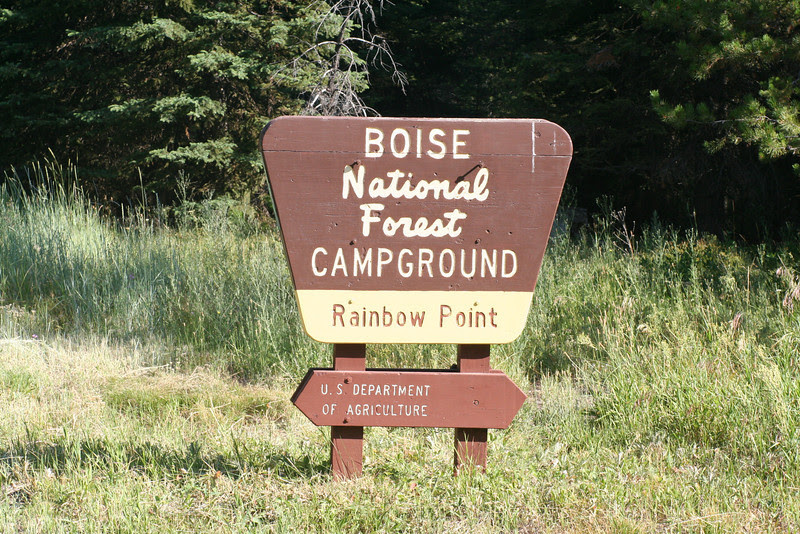 Camp all set up for the first night. 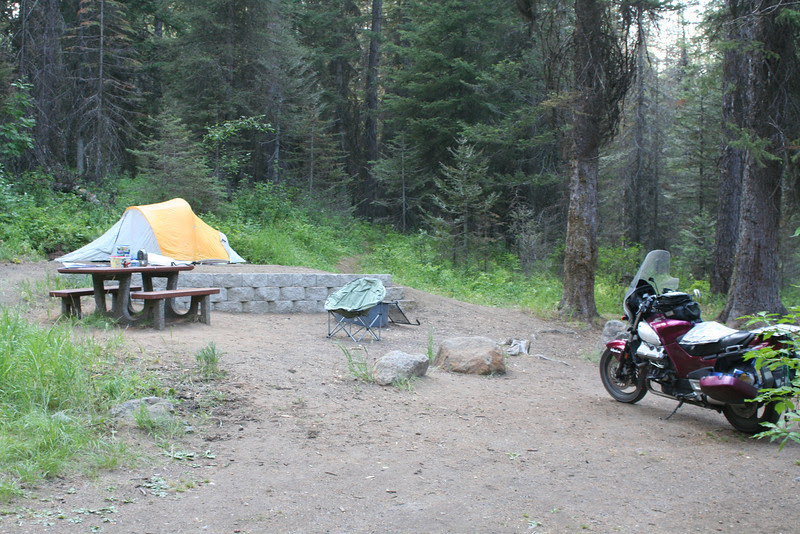 Odometer at the end of the day. 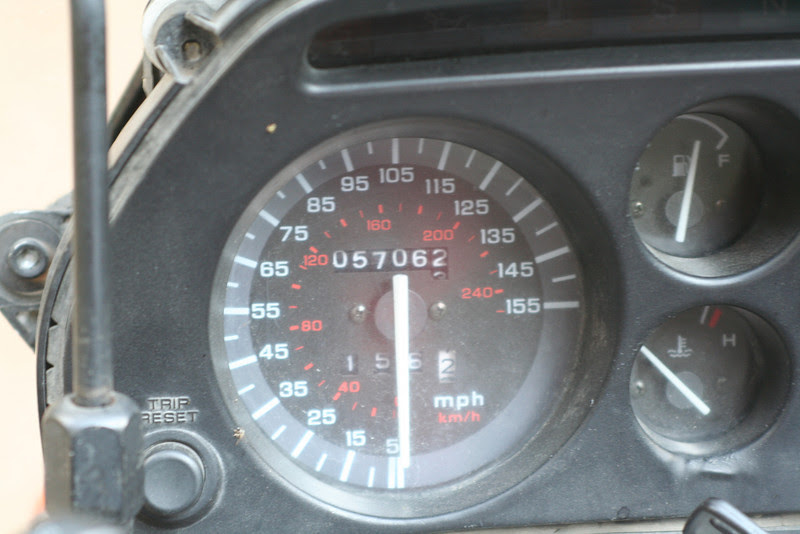 So here are the totals for the day:

One day down, several more to go.

Posted by dorkpunch at 8:57 PM