Bit of a review first on my thoughts of the kit so far. So far I would rate the kit quality as pretty darn good. Not 5 stars, but a good solid 4. A few of the parts have some minor scratches and on part the laser cutting quality is pretty bad but it seems to be 100% functional. I'm loving putting it together- its like playing with a real fancy erector set!

Instructions at this point leave a LOT to be desired- but again, that is why I'm doing this! It's pretty fun to be involved in the development of the directions- I make notes as I go of any errors or suggestions and then I get on Google Docs and make comments, along with several others who are going through the same process. By the end of it all, I believe the next set of kits sold will have an darn near perfect set of directions.

One other thing I want to mention- the times I'm listing include studying the directions, finding parts in the bags, taking pictures, and making notes. It also includes mistakes I make (which so far have been minimal), meaning I have to take something apart and switch it around.

Assembly of the Z axis. 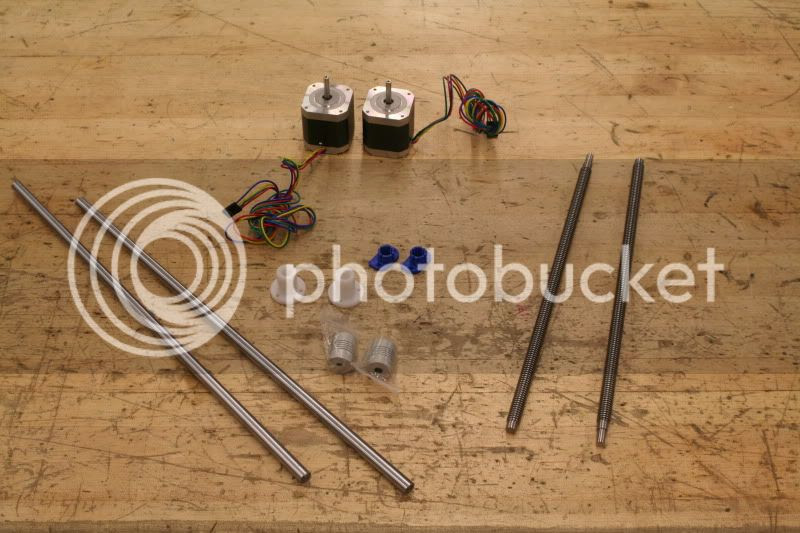 Combine the first two assembly's by setting the x axis in the frame. 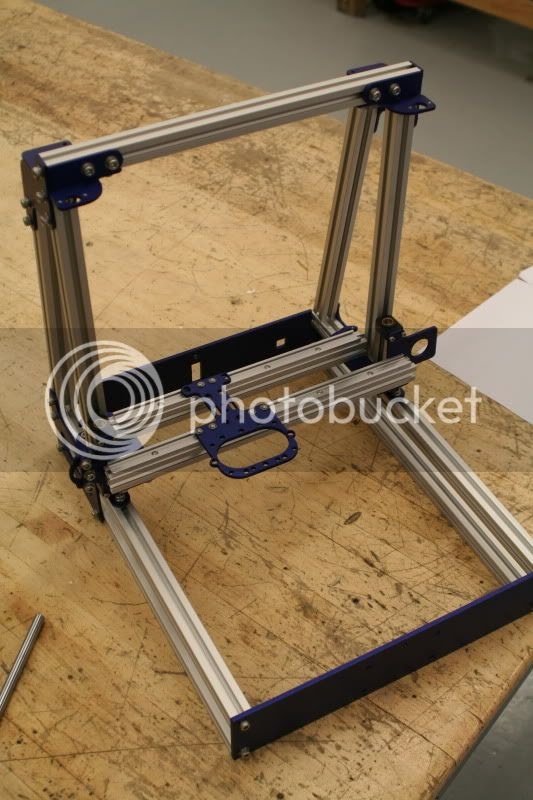 Start adding things!  First thing is the bushing rods.  They are supposed to be adjusted (by tweaking the bushing on the x-axis) so that they sit in the center of the hole on top. 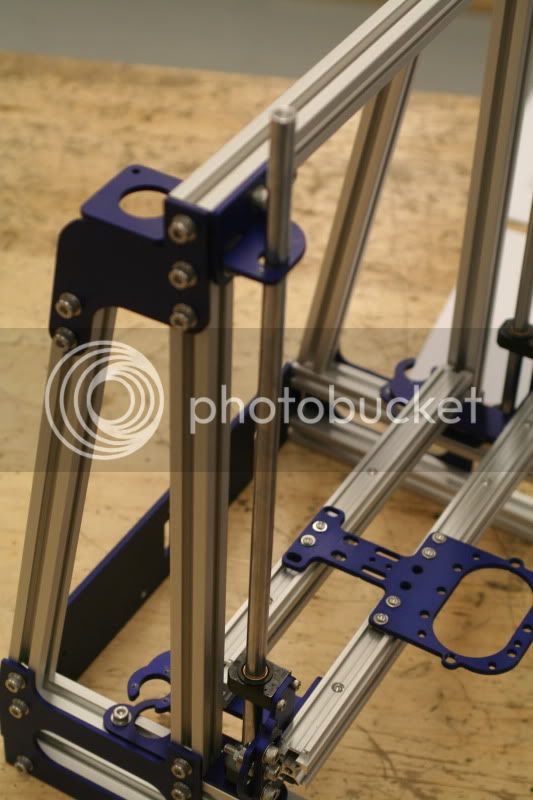 Bushing rod clamp installed.  I later put zip ties around the printed part just to make sure the bushing rods don't pull out. 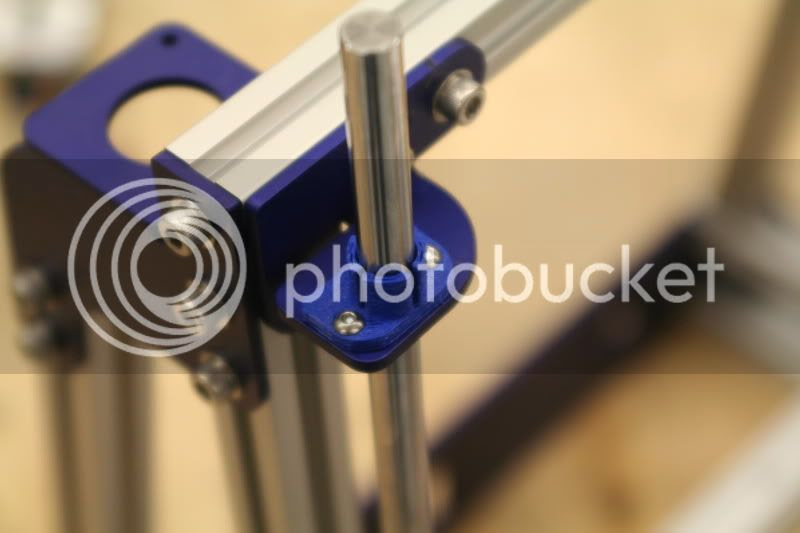 Z screws and accompanying derlinger (?) nuts.  Note which end is facing which direction... The other end of the screws has a longer skinnier piece that attaches to the stepper motors. 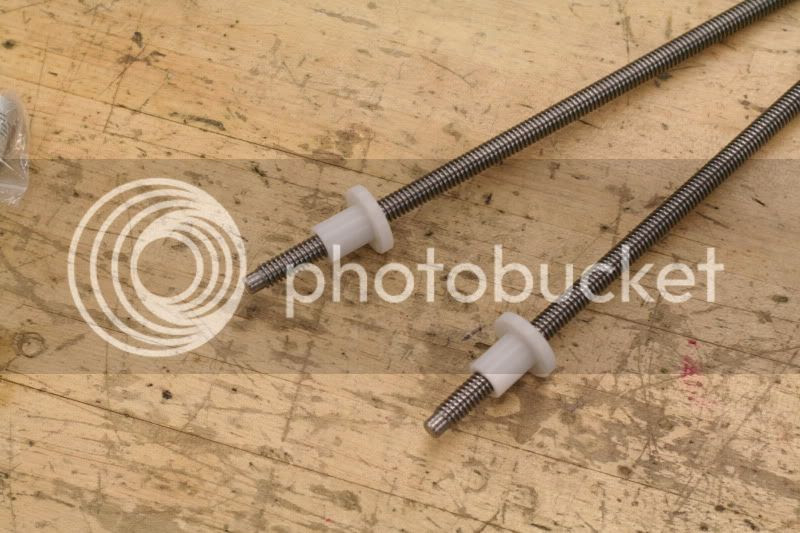 Attached to the x-axis frame. 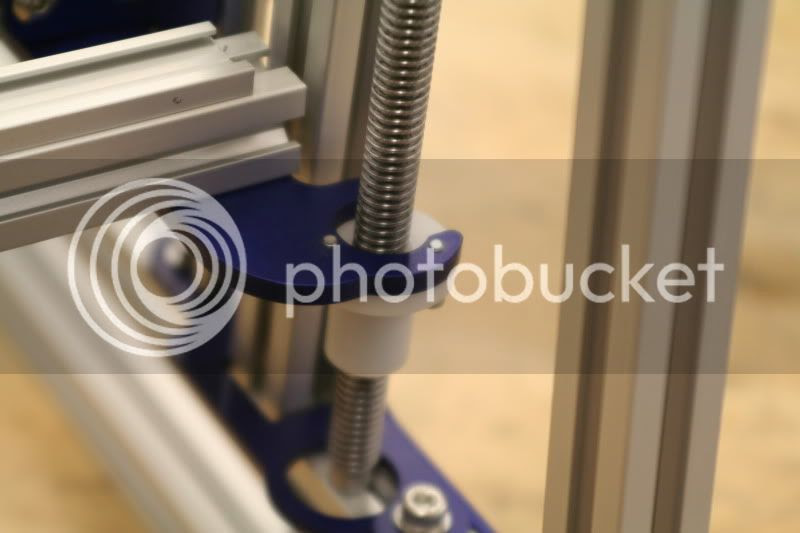 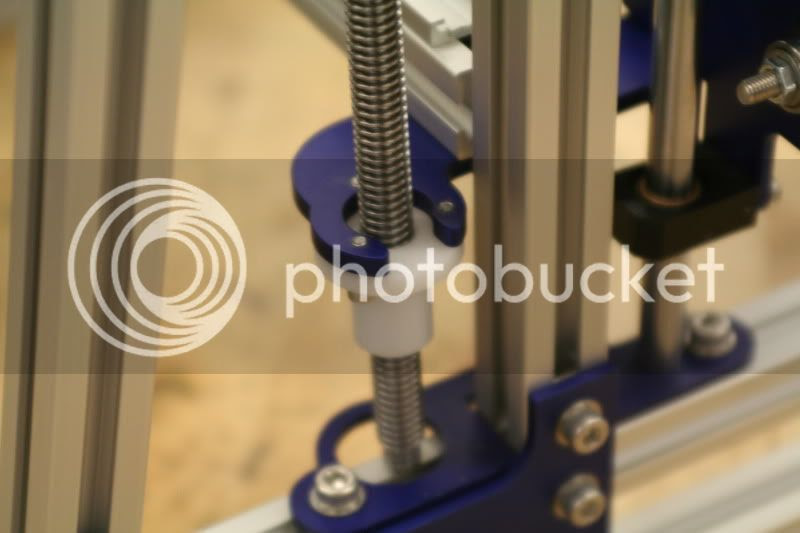 Stepper installed.  I had to loosen the motor plate from the frame and slide it around a little to get the motor to drop back into place.  Repeat for the other side. 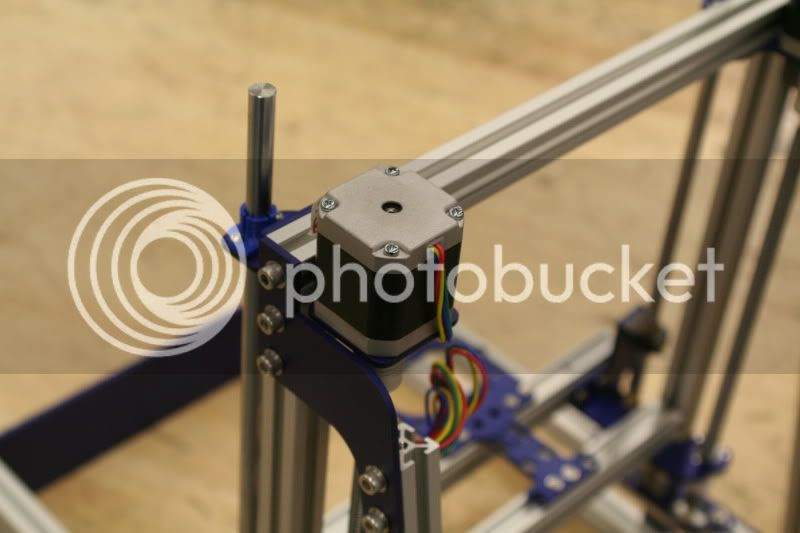 Coupler attached to the screw. 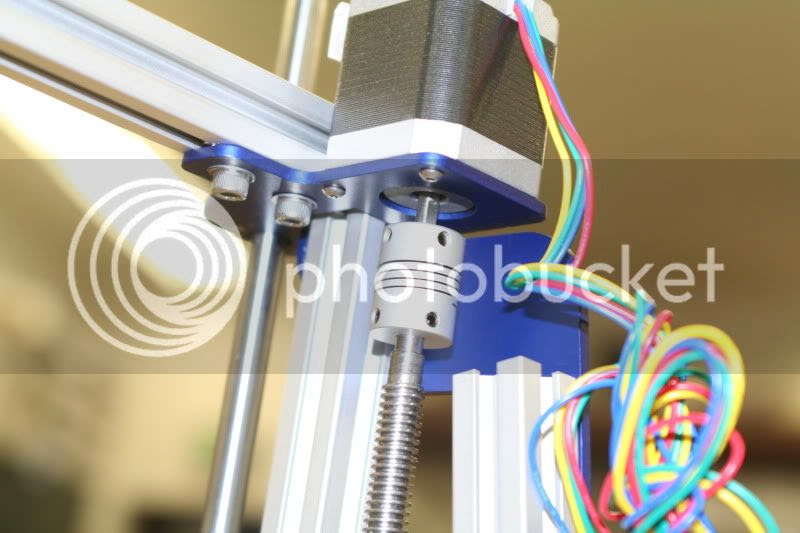 At first I thought this was weird-  It looks like there should be something in the big hole to guide the screw, but nothing goes there.  The screws don't wobble at all. 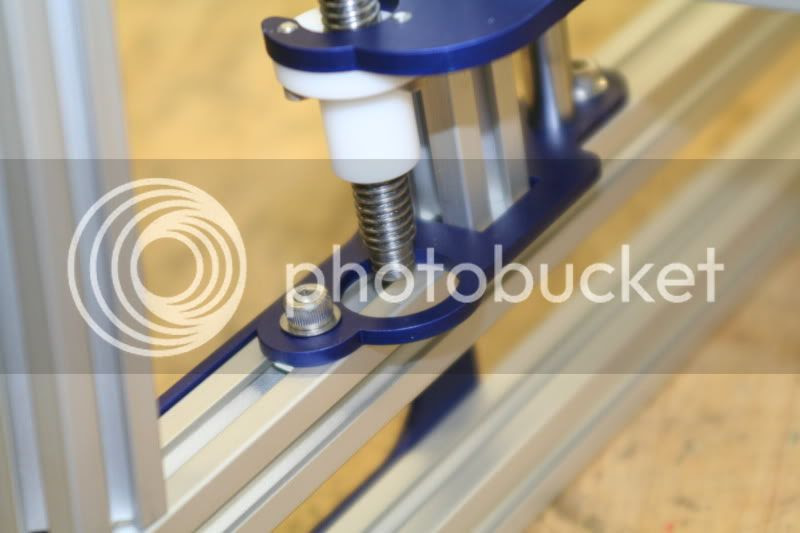 Shot of the completed work so far... 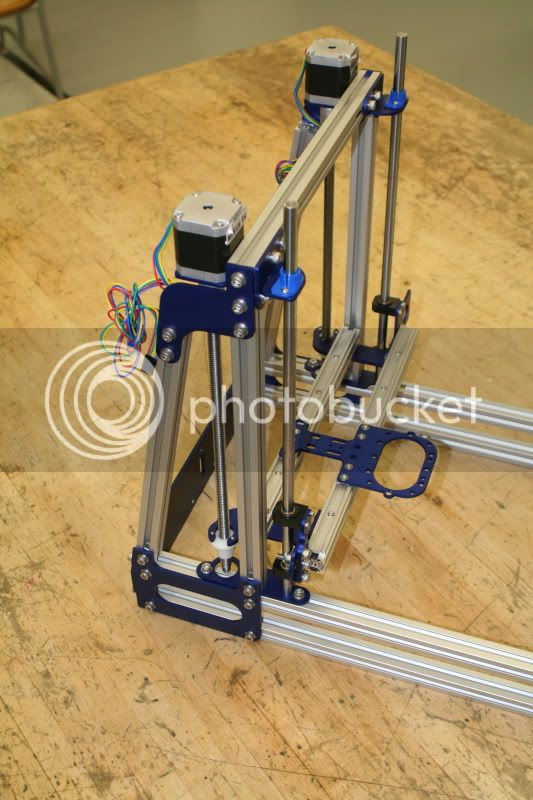 I also installed the x-axis stepper motor.  This was supposed to be done during assembly of the x-axis, but I didn't have my stepper motors with me at the time. 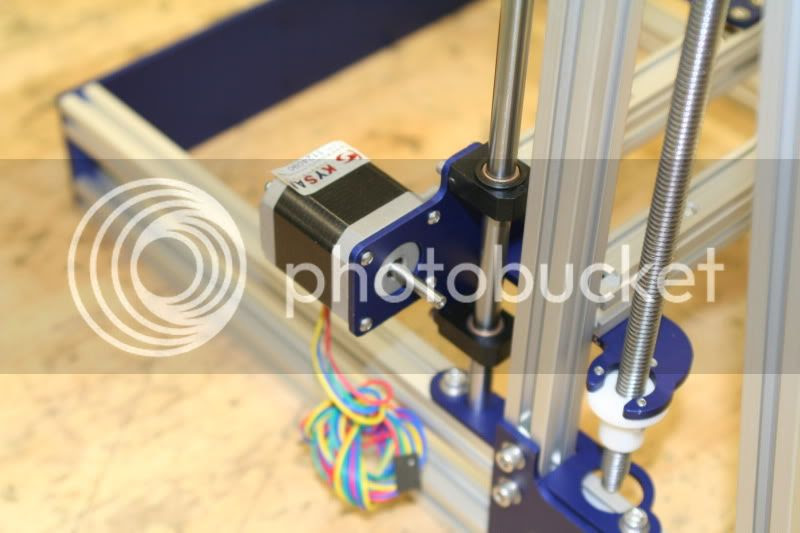 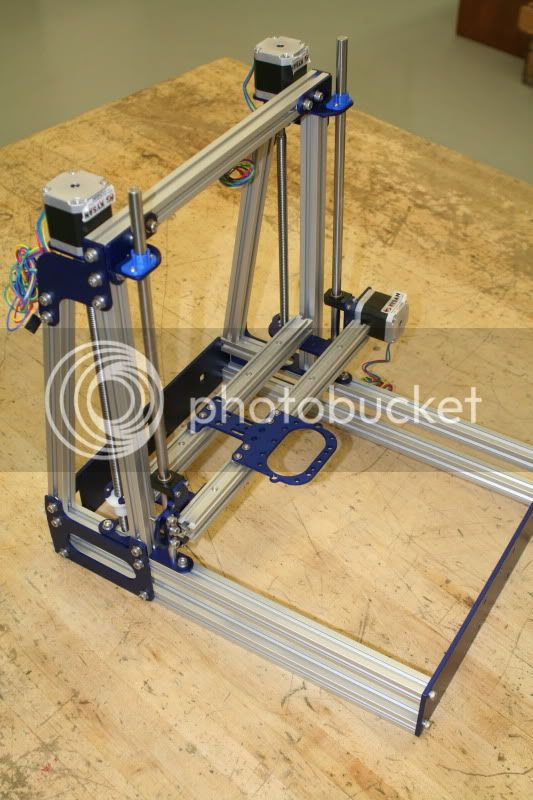 I did have some binding on the z-axis, but I wasn't worried about it at this point.  I had a lot of loose screws still and was planning on spending some time when it was more put together to align everything and get everything moving smoothley.